Location: On board-ship "Diana" off the coast of Rangárvalla-sýlsla, Iceland

A puzzling comment. The Burne-Jones family lived at the Grange, the Morrises at Queens Gate.  What are we to make of ‘by the way’?  Again, we’re reminded that Morris has a specific reader in mind, namely Georgie Burne-Jones.

‘Papey, which is an island inhabited by the Culdee monks’

Medieval written sources, like Islendingabok (The Book of Icelanders) speak of  ‘papar’ (Irish monks), living on this small island in the 8th and 9th centuries, before the first Norse settlers came to Iceland, ca. 870.  No physical evidence of their presence has been unearthed.  Morris here equates the ‘papar’ with Culdee (‘Ceile De’, from ‘client of God’) monks.  These Scots monastics were thought to be pre-Vatican Catholics, northern and Germanic, and Morris would have found that association appealing.  The Culdee are not usually linked to the ‘papar.’

‘the mainland, a terrible shore indeed’

Several of the images in this long passage re-appear in ‘Iceland First Seen,’ an 84-line poem that captures Morris’s excitement, when at 3 AM on this July morning the Diana approached the southern coast of Iceland.  He wrote that poem, as well as ‘Gunnar’s Howe’ (see IJ, July 21, pp. 48-49) while on the 1871 journey.  Magnusson urged his distinguished friend, Jon Sigurdsson, to have both poems translated and published in a journal he edited in Copenhagen.  Jon didn’t like either of them, but he relented on ‘Iceland First Seen,’ and it appeared in Ny Felagsrit in 1872 as ‘I Landsyn vid Island,’and thus the poem was well-known to Icelanders long before it appeared in English, in Morris’s Poems By the Way, in 1891. For important commentary on these two poems, see Andrew Wawn, ‘William Morris and Translations of Iceland.’

‘Bulandstindr which stands a little way down’

Magnusson added a rather pedantic footnote here:  ‘Not “a little way down,” because Bulandstindr stands out at the very extremity of the western side of Berufirth.’  This footnote is the second, of 33, that he added to the 1871 IJ.  He provided 15 for the 1873 IJ (all marked ‘E. M.’), as well as many end-notes, 30 for the 1871 IJ (pp. 237-41), and 41 for the 1873 IJ (pp. 244-51).  These end-notes are fuller and more informative than the footnotes which often seem trivial, as above, and which a few times must have tried the patience of May Morris, who had enlisted Magnusson’s help when she was preparing her edition of the IJ in 1910.   Footnotes that she contributed tend to be short and restrained, and in one of them, concerning her father’s prose, she said:  ‘He has embraced the main features of the country with general accuracy and breadth of vision, and one or two discrepancies in detail need not be noted’ (p. 152).  She added 28 notes (all marked ‘Ed.’) to the 1871 IJ, 10 to the 1873 IJ.  Morris himself had added some three-score notes to the 1871 IJ,  a half dozen to the 1873 IJ.

With an expanse of 3,400 square miles, Vatna-jokul is the third largest glacier in the world, after ice-caps in Antarctica and Greenland.  ALCOA has recently built a huge dam whose lake laps up against the northern edges of this glacier.  See my article, ‘Morris, Iceland and Alcoa,’ The WM Society in the US Newsletter, (Spring, 2006): 12-16.

One of the main characters in Njals Saga, Flosi is a good man provoked into leading the attack on Njal and his sons, and thus to their deaths in the notorious ‘burning-in,’ at Bergthorsknoll. Morris is obviously anticipating their imminent visit to this famous saga site.

‘Ingolf’s Head, where Ingolf first sat down in the autumn of 874’

Here Magnusson, playing the pedant again, adds a footnote:  ‘870 was the date of Ingolf’s landing.  He settled down at Reykjavik 874.’

A group of 14 small islands, just off the south coast of the mainland.  The Diana stops here at the ‘trading station’ on the largest island (Heimey), where 400 people lived then, where there was a good harbor and at the island’s corner ‘an old crater.’  In 1975, there was a spectacular eruption from that crater; lava flowed for days and ash covered whole sections of what had become the town of Vestmanneyjar, with a population of 7,000.  Those folks all fled to the mainland.  They returned when the volcano subsided, and they cleared away the ash and fashioned a larger and safer harbor, utilizing a wall of the new lava.  Morris would have appreciated the tenacity and courage of these island-dwellers.

Morris added a footnote here, one that commented wryly on the kinds of wind and weather and high seas that the these islanders, these ‘poor fellows in their walnut-shell of a boat,’ dealt with routinely.  They’ve rowed out to the Diana to pick up five letters and a book by Magnusson.  Its full title:  Lilya.  The Lily, an Icelandic Religious Poem of the 14th Century, by Eystein Asgrimsson (London, 1870).  A second footnote:  ‘Mrs. Magnusson’s eldest sister’ identifies ‘Maria Einar’s-dottir,’ and it occurs on this same page.  Fiona MacCarthy’s confusion is understandable.  See my note, ‘Magnusson’s Womankind,’ under July 6. 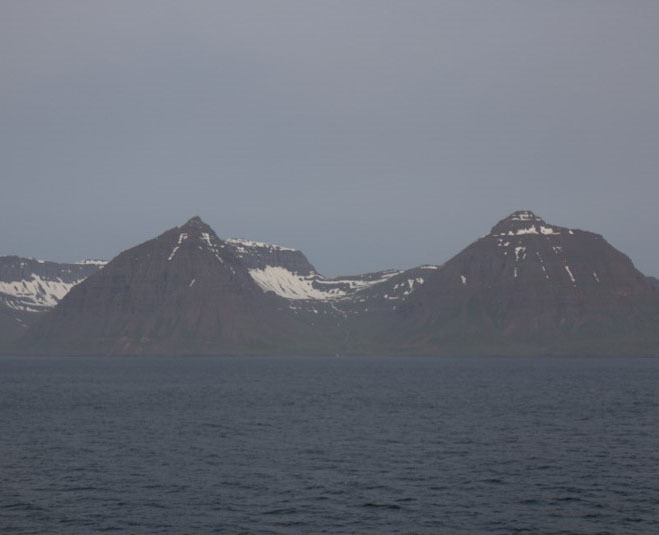 ‘Iceland from the sea as a boat approaches’ (Stott) 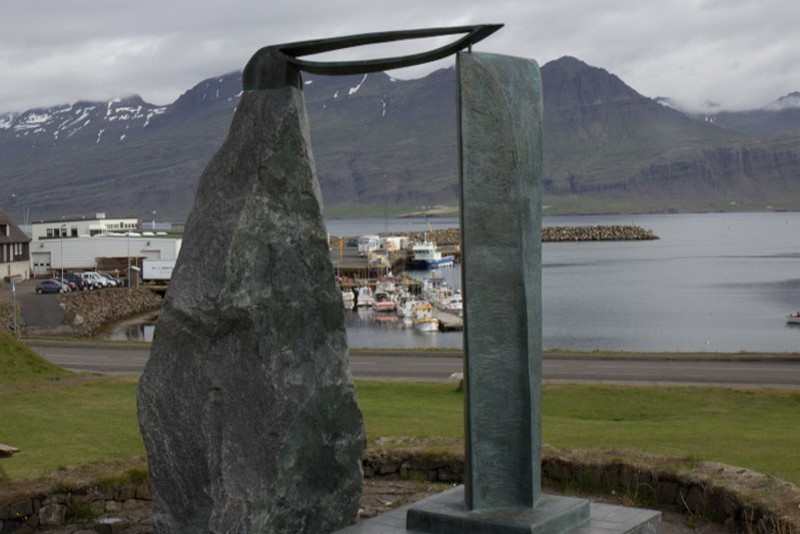