These places include 'Flosi's Hollow' where Flosi and his band, 100 men with their horses, had waited to attack Bergthorsknoll; and also 'Kari's Garth,' where the only survivor of the attack hid after leaping into a stream to quench the flames consuming him. Now, that Hollow, says Morris, 'is not big enough to hide a dozen men,' and there is no stream, only a bog of sorts. The farmer, moreover, told them of a bed of ashes he'd recently discovered, as proof of the actual location of Njal's hall. Morris offers these details to note 'how much the present Icelanders realise [believe] the old stories.' He seems a bit skeptical, and when he calls this tour 'our entertainment,' something the farmer expects to be paid for, he seems disappointed. Then he says, 'I will recapitulate and tell what Bergthorsknoll looks like today, so as to have the matter off my conscience.' The short description that follows is precise and does not mention any of those 'traditional places.' How Morris is thereby easing his conscience raises interesting questions about both tourism and the veracity of the sagas.

Edward Waller (Six Weeks in the Saddle, 1874) says of Hlitharendi, "[It is] the most sacred spot in all the country to anyone conversant with Gunnar's life. . . an old man joined me, and puling a worn edition of the saga out of his pocket, began to read to me of Gunnar's death. We pushed up the hill a way and found a cairn. "It is Gunnar's grave," said the old man. "Here they buried him . . . his spirit rested not in the stony chamber, for on star-lit nights the war songs he had sung in his life were heard again upon the hillside, and magic lights were seen to burn within the cairn." Waller adds a comment, "How strange it all seemed." Yes, and we might add that Waller's belief in the historicity of the saga is also strange, and mirrors Morris's own attitude about the reality of the Njala, of the other Family sagas he's been immersed in for the past few years. See Morris's poem, "Gunnar's Howe above the House at Lithend."

'these meadows were Gunnar's great wealth in the old days, but they are now sadly wasted and diminished by the ruin of black sand'
When Gunnar is riding away from Hlidarendi to serve his three-year sentence of outlawry, his horse stumbles, and Gunnar turns and sees his green fields. His response equals one of the great moments in the saga: 'Lovely is the hillside—never has it seemed so lovely to me as now, with its pale fields and mown meadows, and I will ride back home and not leave.'
Morris realizes that Iceland's geology, rivers of lava as well as glacial floods, will have changed, even obliterated, certain saga sites. They are more evident around the slopes of Hlidarendi, Gunnar's stead, than at Bergthorsknoll, where Morris was uneasy with those 'traditional places.'

'a man named Jon'
An appealing and interesting man, who was to be Morris's major guide on the 1873 journey. He corresponded with Morris, and with Janey, to whom he sent a poem about Morris, a major influence on this poor and learned saddle-maker. See Ruth Ellison, 'The Saga of Jon Jonsson, Saddlesmith of Lithend-cot,' Journal of William Morris Studies, vol. 10, pp. 21-30.

'a big mound rising up from the hollow, and that is Gunnar's Howe: it is most dramatically situated to remind one of the beautiful passage in the Njala where Gunnar sings in his tomb.'
The dead Gunnar singing, defiant in his tomb, this is the sort of magic saga incident that springs to his mind when Morris sees this 'big mound' in just the right spot, and it tells us why a journey to visit saga sites could be so important to someone with Morris's sensibilities. Here Morris adds a footnote containing the passage from the Njala when Skarphedin and Hogni see the Howe open, Gunnar within, singing merrily. This would be the subject for one of Morris's finest poems, 'Gunnar's Howe Above the House at Lithend,' one he wrote in the next few weeks. This was one of the two poems that Magnusson asked Jon Sigurdsson to publish in his journal, Ny Felagsrit, in 1872. Jon published the other one, 'Iceland First Seen.' See above, my note on 'the mainland,' under July 13. And see also Andrew Wawn, 'William Morris and Translating Iceland.' 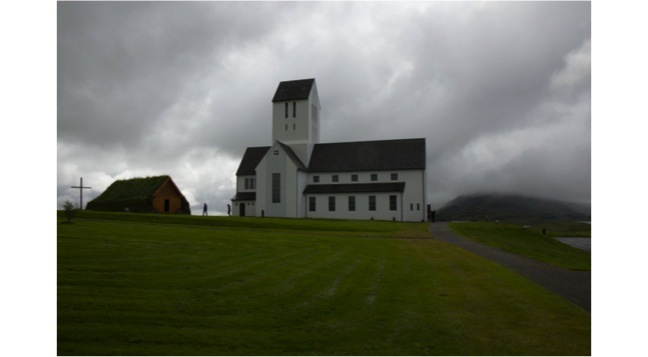 ‘. . . I slept well but woke up every now and then to hear the rain pouring down on the tent and the wind flapping it, but while we were at breakfast (chocolate and cold bacon) it cleared up for a little and we got away dry: we skirted the plain still by the mountain slopes and saw presently Miodal and its little church, the stead we ought to have made last night; here the drizzling rain came down on us again and hid everything distant: it was charged too with fine dust that half blinded us and we seemed to be riding through a middling London fog’ (IJ p 191). 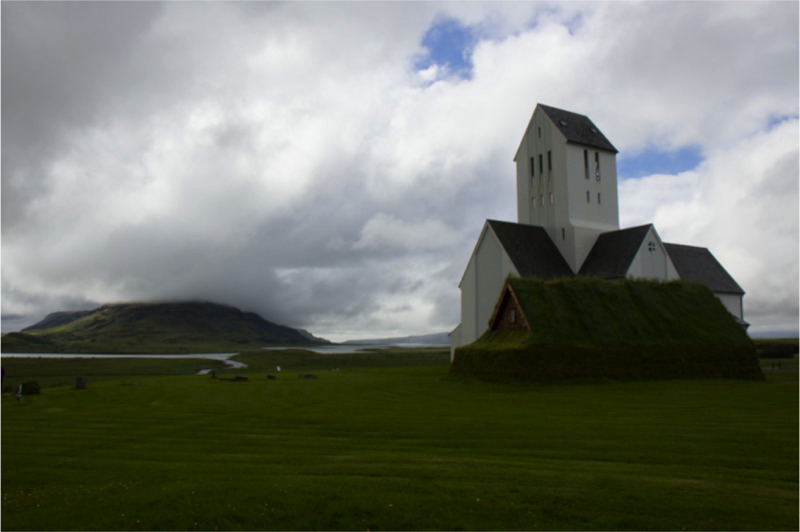 ‘Thence we got into another bog and over a ridge into a long valley all pure bog between two straight hillsides, along one of which we floundered till Jon showed us a mound on the other hillside which was Scalhot, so thither we turned by the least impassable way across the bogs, when lo, when we were halfway across, it cleared a bit and we could see the stead clear, a blue mountain rising in the distance over it, and below it a great bight of White-water, with a fine swelling mountain on the other side of it’ (IJ p 192).