Burgmair was associated with the St. Barbara engraving, and also with a north Byzantine tradition 'mixed up with the crisp sixteenth century leafage'. Morris assumes any/everyone would recognize such 'leafage,' and 'crisp' seems a wonderfully evocative modifier, one which brings to mind Morris's flat-pattern designs on wall-papers and tapestries, the designs that made Morris and Co. famous. That such a learned passage on 16th century art occurs side by side with the ribald Faulkner 'legend' makes Morris's Icelandic Journal desscriptions stand apart from those in other diaries and journals of Iceland travelers.

‘'the bondr . . . who has been in Scotland and talks English, and is an intelligent man enough: not much to his benefit, I  am afraid, for he seems discontented with Iceland in consequence. However he knows the sagas well . . . they always read over his stock of them every winter.’
Morris was more apt to meet intelligent Icelanders who spoke Danish.  Note here the distinction Morris makes: a land-owner who dislikes modern Iceland but reveres its ancient literature so much that he reads through  the sagas every winter.  Icelanders, in a circle round a solitary reader, listening to him read the ancient tales, is a stock motif, one that occurs in popular etchings. The disjunction between 19th century Iceland and its poverty and problems and the vibrant society depicted in the sagas, a thousand years earlier, is one noted before, one that Morris ponders at the site of Njal’s burning in, and—in an oft-quoted passage from his August 6th entry: "Think what littleness and helplessness has taken the place of the old passion and violence." ’
‘'Borgarvirki, a  strange piece of nature hereby:  it is old crater . . . crowning a sloping hill some furlong  from the stead, and has from time immemorial formed a regular round tower . . .there is only one breach in the natural wall, which is flat at the top like a rampart almost all round, with room for about four men to stand abreast on it: we clamber painfully up the said breach, which is made good by man’s handiwork with huge rough stones piled up into a fair wall . . . once in the floor of the tower is smooth sweet grass . . . ‘
This tower is a wondrous mix of the natural and man-made, a land-mark that astonishes all  visitors, one that Morris describes well, as he climbs through the debris of fallen blocks and into the  tower’s floor with its ‘sweet’ and natural grass.  Again, the setting,  the tower, is linked to a saga, one that Morris knew well.

‘he turned out to be Baring-Gould’s guide, and I thought him an unpleasant, boastful, vulgar sort of fellow: he was travelling about the country for the Sottish horse dealers.’

Baring-Gould (Iceland: Its Scenes and Sagas, 1862) spent more time in Grettir’s domains than even Morris. This ‘unpleasant, boastful, vulgar’ man, who here receives an unusual string of pejoratives, this ‘fellow’ has a truly odious job. He’s buying sturdy Icelandic ponies who shall be shipped to Scotland to work in coal mines, where they will live out their lives, pulling heavy wagons, never to see green grass or to breathe pure air again. May Morris in her introduction mentions these horses when she talks of Mouse, a horse that Morris rides on this 1871 trek and that he brought back to Kelmscott, where he became a favorite of the Morris girls: ‘I often thought about him, the lonely little beastie . . . It was long a grief to us children to know that the fate of many of his fellows when sold to the Scottish dealers was to go down into the mines, where they never saw daylight again—the squalor, the desolation of it, after this wild free life [in Iceland] between firth and mountain!’

‘the bondr Vithalin, somewhat of a magnate, a man who can trace his direct descent to a ‘landnamsman,’ . . . a friend of Magnasson’s too, and they fell to talking busily about politics . . .’

This bondr, because his name and lineage appear in the Landsnamabok, would indeed be important, even a ‘magnate,’ though that noun seems out of place, here in rural Iceland. That he and Magnusson talk politics is understandable, when we recall that Jon Arnasson was drafting Iceland’s constitution at the time. One wishes that Morris had recorded some of their talk here, but his account is for Georgie, rather than fellow politicos, so we get a mere mention and then talk of food and sleep.

‘Then the host showed us his antiquities, an old pewter ‘askr’ or porridge pot, which he said had belonged to bishop Guthbrand (1627), and was at all events of his date; several good cups and spoons of silver, and a fine piece of embroidery with scripture with scripture subjects worked in circles, . . . it looked like thirteenth century work: but I suppose was eighteenth.’

In the BM draft of the 1871 Journal, Morris included a sketch of this pewter pot. That the pot had once belonged to Guthbrand (see next entry) would make it valuable. Morris’s certainty in dating such artifacts we've noticed before.

'a small library of old books (Latin medical) and, kicking about, a fine copy of the Guthbrandr Bible in its original binding brass-bound and very good.'
Morris's interest in 'old books' is well-known, and the phrase 'kicking about' suggests his surprise at finding this precious book in the doctor's dirty and cluttered study.  Guthbrandr Thorlaksson (1541-1627), the Bishop of Holar, translated Luther's Bible (Frankfurt,1572) into Icelandic; moreover, and more importantly, he made 500 copies of this bible on an imported press, cutting the type and wood-blocks himself.  This was truly 'very good,' and just the sort of book Morris would collect during the last decade of his life.
''We are come in Vithidal now, and behind us . . . the hills of Longdale, the main scene of the Bandamanna Saga . .  . Borg, the place of the Saga of Finnbogi the Strong . . .'
Here we get a good sense of how many of the Family Sagas Morris had read and knew well in the few years he'd been under Magnusson's tutelage. The Icelander adds a long end-note:  'Vithidal--Willowdale is historically a very interesting countryside . . . it will interest English readers to know, that according to Landnama, the first settler of the valley was Authun Skokul, the grandson of an English lord . . .' (p. 238).  It seems doubtful that readers of the Icelandic Journals would be concerned about erudite details re: early Icelanders.   They're more likely to be interested in Morris's reactions to saga sites, and one wishes that Magnusson had recalled what Morris said at the time, in 1871, rather than what he (Magnusson) conjured  up 40 years later.  We get a sense of why Cockerell thought Magnusson to be 'tiresome.' 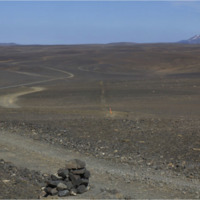 ‘. . . we were on the bare sand and stones again and mounting somewhat saw several peaks rising over the flatter ground which seemed very wide indeed’ (IJ p 216). 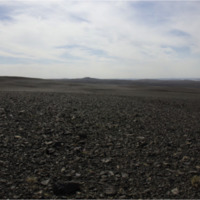 ‘The raven flies about here making noises like winding up a big clock – and we have to go up it a good way to get across – which done we are still on the same black plain and ride over slope after slope of it’ (IJ p 216).