We started before six o’clock the next morning, as we were still twenty-five miles from our resting place, and Dick wanted to be there before dusk. The journey was pleasant, though to those who do not know the upper Thames, there is little to say about it. Ellen and I were once more together in her boat, though Dick, for fairness’ sake, was for having me in his, and letting the two women scull the green toy. Ellen, however, would not allow this, but claimed me as the interesting person of the company. “After having come so far,” said she, “I will not be put off with a companion who will be always thinking of somebody else than me: the guest is the only person who can amuse me properly. I mean that really,” said she, turning to me, “and have not said it merely as a pretty saying.”

Clara blushed and looked very happy at all this; for I think up to this time she had been rather frightened of Ellen. As for me I felt young again, and strange hopes of my youth were mingling with the pleasure of the present; almost destroying it, and quickening it into something like pain.

As we passed through the short and winding reaches of the now quickly lessening stream, Ellen said: “How pleasant this little river is to me, who am used to a great wide wash of water; it almost seems as if we shall have to stop at every reach-end. I expect before I get home this evening I shall have realised what a little country England is, since we can so soon get to the end of its biggest river.”

“Yes,” she said, “and don’t you find it difficult to imagine the times when this little pretty country was treated by its folk as if it had been an ugly characterless waste, with no delicate beauty to be guarded, with no heed taken of the ever fresh pleasure of the recurring seasons, and changeful weather, and diverse quality of the soil, and so forth? How could people be so cruel to themselves?”

“And to each other,” said I. Then a sudden resolution took hold of me, and I said: “Dear neighbour, I may as well tell you at once that I find it easier to imagine all that ugly past than you do, because I myself have been part of it. I see both that you have divined something of this in me; and also I think you will believe me when I tell you of it, so that I am going to hide nothing from you at all.”

She was silent a little, and then she said: “My friend, you have guessed right about me; and to tell you the truth I have followed you up from Runnymede in order that I might ask you many questions, and because I saw that you were not one of us; and that interested and pleased me, and I wanted to make you as happy as you could be. To say the truth, there was a risk in it,” said she, blushing—“I mean as to Dick and Clara; for I must tell you, since we are going to be such close friends, that even amongst us, where there are so many beautiful women, I have often troubled men’s minds disastrously. That is one reason why I was living alone with my father in the cottage at Runnymede. But it did not answer on that score; for of course people came there, as the place is not a desert, and they seemed to find me all the more interesting for living alone like that, and fell to making stories of me to themselves—like I know you did, my friend. Well, let that pass. This evening, or to-morrow morning, I shall make a proposal to you to do something which would please me very much, and I think would not hurt you.”

I broke in eagerly, saying that I would do anything in the world for her; for indeed, in spite of my years and the too obvious signs of them (though that feeling of renewed youth was not a mere passing sensation, I think)—in spite of my years, I say, I felt altogether too happy in the company of this delightful girl, and was prepared to take her confidences for more than they meant perhaps.

She laughed now, but looked very kindly on me. “Well,” she said, “meantime for the present we will let it be; for I must look at this new country that we are passing through. See how the river has changed character again: it is broad now, and the reaches are long and very slow-running. And look, there is a ferry!”

I told her the name of it, as I slowed off to put the ferry-chain over our heads; and on we went passing by a bank clad with oak trees on our left hand, till the stream narrowed again and deepened, and we rowed on between walls of tall reeds, whose population of reed sparrows and warblers were delightfully restless, twittering and chuckling as the wash of the boats stirred the reeds from the water upwards in the still, hot morning.

She smiled with pleasure, and her lazy enjoyment of the new scene seemed to bring out her beauty doubly as she leaned back amidst the cushions, though she was far from languid; her idleness being the idleness of a person, strong and well-knit both in body and mind, deliberately resting.

“Look!” she said, springing up suddenly from her place without any obvious effort, and balancing herself with exquisite grace and ease; “look at the beautiful old bridge ahead!”

The "New Bridge" built around 1250 and heavily re-built in the fifteenth century. During the Civil War, the Parliamentarians destroyed part of the bridge to prvent the Royalists escaping from Oxford.

“I need scarcely look at that,” said I, not turning my head away from her beauty. “I know what it is; though” (with a smile) “we used not to call it the Old Bridge time agone.”

She looked down upon me kindly, and said, “How well we get on now you are no longer on your guard against me!”

And she stood looking thoughtfully at me still, till she had to sit down as we passed under the middle one of the row of little pointed arches of the oldest bridge across the Thames.

“O the beautiful fields!” she said; “I had no idea of the charm of a very small river like this. The smallness of the scale of everything, the short reaches, and the speedy change of the banks, give one a feeling of going somewhere, of coming to something strange, a feeling of adventure which I have not felt in bigger waters.”

I looked up at her delightedly; for her voice, saying the very thing which I was thinking, was like a caress to me. She caught my eye and her cheeks reddened under their tan, and she said simply:

“I must tell you, my friend, that when my father leaves the Thames this summer he will take me away to a place near the Roman wall in Cumberland; so that this voyage of mine is farewell to the south; of course with my goodwill in a way; and yet I am sorry for it. I hadn’t the heart to tell Dick yesterday that we were as good as gone from the Thames-side; but somehow to you I must needs tell it.” 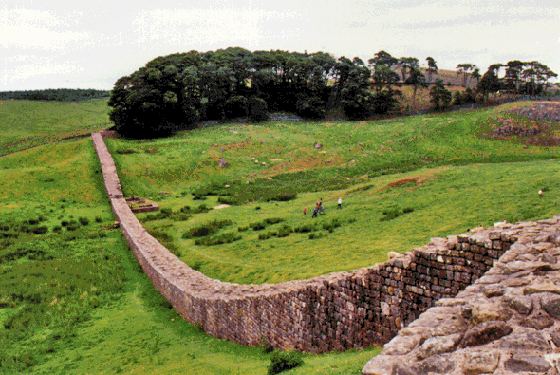 She stopped and seemed very thoughtful for awhile, and then said smiling:

“I must say that I don’t like moving about from one home to another; one gets so pleasantly used to all the detail of the life about one; it fits so harmoniously and happily into one’s own life, that beginning again, even in a small way, is a kind of pain. But I daresay in the country which you come from, you would think this petty and unadventurous, and would think the worse of me for it.”

She smiled at me caressingly as she spoke, and I made haste to answer: “O, no, indeed; again you echo my very thoughts. But I hardly expected to hear you speak so. I gathered from all I have heard that there was a great deal of changing of abode amongst you in this country.”

“Well,” she said, “of course people are free to move about; but except for pleasure-parties, especially in harvest and hay-time, like this of ours, I don’t think they do so much. I admit that I also have other moods than that of stay-at-home, as I hinted just now, and I should like to go with you all through the west country—thinking of nothing,” concluded she smiling.

“I should have plenty to think of,” said I.