Location: In camp at Geysir

'pretty Sallust from me'
Morris had brought along small gifts, gracious exchanges for hospitality received. Here the gift is evidently an edition of the Roman historian, Sallust (86-34 BC), perhaps his history of the Catiline wars.

'famous to Mangnall's Questions'
Richmall Mangnall (1769-1820), a Yorkshire school-mistress, was the author of Historical and Miscellaneous Questions for the Use of Young People (1800), widely used in British schools in the first half of the 19th century.

'Geysir the Icelanders call it, . . . Gusher'
According to the OED, “Geysir' entered the corpus of English in 1780, but Morris, 80 years later, evidently still felt the need to translate it. It's now understood by all English speakers, one of the few Icelandic loans in the language. (Another is 'berserk'). That the sagas never mention the Geysirs perhaps seemed to Morris a further indication of their insignificance.

'beastly place'
This noun phrase opens and closes a score of lines where Morris's prose artfully conveys his scorn for the proposed camp-site, for the British tourists who had befouled the place.  Alliteration links and supports semantic associations, as with the /st/'s in 'stinking steam', and then 'nasty' and  'bestrewn.'  And consider also the ways his SCORN is packed into, carried along in the repeated sibilants, and in the /sk/'s in 'scored,' scalding,' and 'squelched.'   We must believe that he is indeed 'feeling a very unheroic disgust gaining on me,' a Morrisean eruption, yes:  a mini-Geysir.  But the adjective 'unheroic' undercuts all that rumbling; here's that self-deprecating narrator again, trying to get a smile from Georgie.  Such passages, conveying both a strong sense of place and also of Morris's personality, make his descriptions of Iceland unique.

Drangey
Drang Island's massive cliffs rise out of the cold waters of Skagafjord in north central Iceland.  Here is where Grettir, the legendary outlaw—hero of Grettisaga—met his end.  Morris and Magnusson had recently translated the saga, published in 1869 as The Story of Grettir the Strong.  As the party moves northward, it passes through sites prominent in the saga, and Morris's reflections are often striking, so it's a pity that this famous and striking island was not on the itinerary.

'He was rather more than half grinning at me all the time, don't you see'
Morris provides a rather humorous mini-drama here, a confrontation between the Icelandic guide and the two British visitors, who despite their angry imprecations, will end up following the Icelander's advice, and camping at the site made noxious to Morris by the litter left behind by earlier visitors.  Eyvindr grins at his small triumph, at Morris's anger. Such confrontations between canny natives and naïve travellers are common in travel narratives, made interesting here because the referent for 'you' is Georgiana, so again we see Morris making fun of himself.  We also see here his prowess with Icelandic, since he's translating Eyvindr's remarks for Evans. 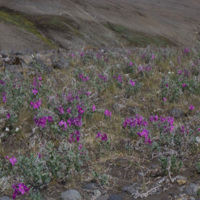 ‘. . . a very bright gay red-purple flower with grey leaves and red stems grew in great masses amidst the river-bed: I son’t know the name of it’ (IJ p 65). 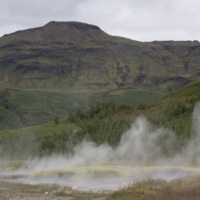 ‘. . . presently as we ride along Gisli points out to me through an opening of the hills on our left a low hill across a flat valley, all burnt red with earth-fires, and underneath it a whitish slope with a great cloud of steam drifting about it: this (a long way off still) is our journey’s end to-day, and I feel ashamed rather that so it is; for this is the place that has made Iceland famous to Mangnall’s Questions and the rest, who have never heard the names of Sigurd and Brynhild, of Njal or Gunnar or Grettir or Gisli or Gudrun: Geysir the Icelanders call it, which being translated signifyeth the Gusher’ (IJ p 66). 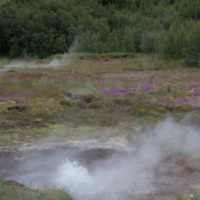 ‘. . . however go we must, and presently after crossing a small bright river, come right on the beastly place, under the crater of the big Geysir, and ride off the turf on to the sulphurous accretion formed by the overflow, which is even now trickling over it, warm enough to make our horses snort and plunge in terror . . .’ (IJ p 67).