Location: On board-ship "Diana," the Faroes astern of us

Here again we note Morris’s emotional reactions to landscape.  And in the following few lines, ‘grey’ appears five times, modifying ‘morning,’ ‘water,’ ‘grass,’ ‘ledges,’ and ‘clouds.’  Andrew Wawn, in a recent essay, points out that ‘grey’ occurs over 100 times in the Journals, and he claims that it’s a ‘fundamental colour’ for Morris—‘the essential background against which the stunning primary colours of Iceland flicker across page after page like Northern Lights’ (p. 264). ( ‘William Morris and Translations of Iceland,’ Translating Life: Studies in Transpositional Aesthetics.  Liverpool:  Liverpool University Press, pp. 253-76.)

‘English colours . .  from Grimsby for Iceland’

British fisherman from ports like Grimsby plied the cod-rich waters around Iceland from the middle ages up into the mid-twentieth century, when the Icelanders prevailed in the famous ‘cod-wars,’ when Icelandic gun-boats turned away British trawlers, often after ruining their nets and gear.  Later in the Journals, Morris comments on French fishing boats in an Icleandic port, but he is strangely silent on the ways European fisheries colluded with the Danish trade monopoly to keep Icelandic fishermen off the high seas.

Morris is bemused by the garb of the Faroese boat-men, by a strange combination of cloth hat with a floppy sort of cone—red ones appear in 18th and 19th century depictions of revolutionaries—and a coat that reminds him of medieval royalty.  Such playful erudition again reminds us of his primary audience, Georgie Burne-Jones.

Morris’s certainty with regard to the provenance of anything man-made is always refreshing.  He’s quite right about these wooden boats.  Twentieth century discoveries of Viking ships in burial mounds and from the bottom of Roskilde Sound in Denmark, and elsewhere, have proven that strake-built (overlapping planks) construction of wooden ships began in 8th century Scandinavia.  And it was these ships that carried the Norsemen west, and into history.

times of the sagas

There are several types of sagas.  The Family Sagas, also Sagas of Icelanders (Islendinga Sogur), are the ones most often read. Morris and Magnusson had already translated several of them.  Njals Saga is the best of the thirty-some Family Sagas.  Then there are the Kings Sagas(Konunga Sogur), the histories of Norwegian kings.  Here falls the Heimskringla, which takes up the bulk of Morris and Magnusson’s six-volume Saga Library. There are also Bishop’s Sagas (Byskupa Sogur), tales of Iceland’s bishops, and Knight’s Sagas (Riddara Sogur); these are much more European—often close translations of Arthurian romances.  And there are many folk-tales, sometimes called Lying Sagas (Lygi Sogur).

Water-proofing tar rendered from pine trees, plentiful in northern forests along northern fjords, and hence a staple of Stockhom merchants.

We were to go a walk…

Thus begins a long description of a days’ excursion up and over the rocky spine of Straumoy from Torshavn to Kirkiuboe, a farm that during medieval times was an important church center.  We see Morris being ‘affected strongly by all the familiar flowers [he identifies and names a dozen of them!] growing in a place so different.’  And we appreciate his awe-struck responses to the craggy peaks and steep cliffs on these small islands, separated by deep channels and fjords:  ‘it was like nothing I had ever seen, but strangely like my old imaginations of places for sea-wanderers to come to.’  Those sea-scapes and islands he’d depicted in the Life and Death of Jason and in The Earthly Paradise, those scenes are now somehow before his eyes, here in the Faroe Islands.  And he’s seeing them for the first time.  Morris manages to communicate his excited wonder at it all in these descriptions of their walk across the island and then of that evening’s departure through those channels and out into the Atlantic.  These several pages are among the best in the Icelandic Journals.

Again we note Morris’s certitude in dating artifacts, now taking on the local parson  who had insisted that a church here was built during the Reformation.  But Morris ‘stoutly asserted, to the parson’s disgust,’ that the date was much earlier, and again Morris was correct.  He was also quite right regarding the date and style of some richly carved pine benches and altar pieces that had been made for that church.  These carvings and their connections to the church ruins are the subject of an important book by Knut J. Krogh:  Kirkjubour Benches and the Cathedral (Torshavn:  Emil Thomsen, 1988).

best sight of the Faroes yet to see

Morris sees again the terrain they’d crossed that day, but now from the deck of the Diana.  The ship goes round the end of Straumoy and then glides past the church center they’d visited a few hours earlier, and then into a narrow channel, and then there’s another island and they’re very close to ‘a stead with its homefield sloping down to the sea, the people running out to look at us,’ and always there’s the abrupt cliffs and high peaks as backdrops.  Morris’s prose captures his delight at all he beholds.  A few days later, in a letter to Janey, he speaks of their last few hours in the Faroes:  ‘it was so calm that evening that the captain was able to thread the labyrinth of the islands, and a most wonderful sight it was:  I have seen nothing out of a dream so strange as our coming out of the last narrow sound into the Atlantic and having the huge wall of rocks astern in the shadowless midnight twilight; nothing I have ever seen has impressed me so much.’ (Kelvin, I, p. 141)

'the pleasant-looking little town of Thorshaven' 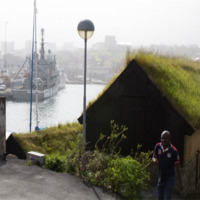 ‘ . . . at last at the bight’s end we saw the pleasant-looking little town of Thorshaven, with its green-roofed little houses clustering around a little bay and up a green hillside: thereby we presently cast anchor, the only other craft in the harbour being three fishing-smacks, cutters, who in answer to the hoisting of our flag ran up English colours, and were, we afterwards found out, from Grimsby for Iceland’ (IJ p 12). 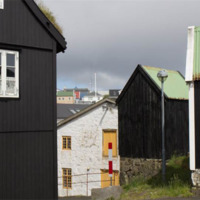 ‘Thence we went out into the town, which pleased me very much: certainly there was a smell of fish, and these creatures, or parts of them, from guts to gutted bodies, hung and lay about in many places; but there was no other dirt apparent; the houses were all of wood, high-roofed, with little white casements, the rest of the walls being mostly done over with Stockholm tar . . . (IJ p 13). 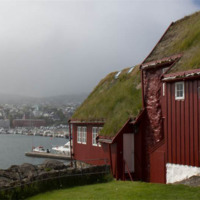 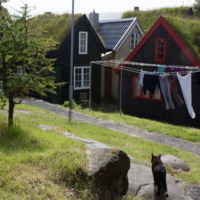 ‘We were to go a walk under the guidance of a Faroe parson to a farm on the other side of the island (Straumey), and so presently having gone through the town we met on a road that ran through little fields of very sweet flowery grass nearly ready for the scythe: it affected me strangely to see all the familiar flowers growing in a place so different to anything one had ever imagined, and withal (it had grown a very bright fresh day by now) there was real beauty about the place of a kind I can’t describe’ (IJ p 13).

'the ruin of a stone medieval church' 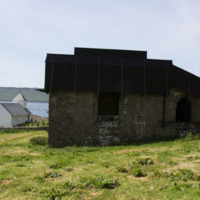 ‘We turned another spur of the hills soon, and then the land on our side fell back, the long island aforesaid ended suddenly and precipitously, and there was a wide bay before us bounded on the other side now by the steep grey cliffs of another island: the hillsides we were on flattened speedily now, under steep walls of basalt, and at the further end of them close by the sea lay the many gables (black wood with green turf roofs) of the farm of Kirkiuboe (Kirkby), a littlewhitewashed church being the nearest to the sea, while close under the basalt cliff was the ruin of a stone medieval church: a most beautiful and poetical place it looked to me, but more remote and melancholy than I can say, in spite of the flowers and grass and bright sun: it looked as if you might live for a hundred years before you would ever see ship sailing into the bay there; as if the old life of the saga-time had gone, and the modern life [had] never reached the place’ (IJ pp 14-15). 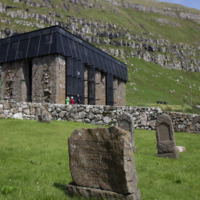 ‘We hastened down, along the high mowing-grass of the homefield, full of buttercups andmarsh marigolds, and so among the buildings: the long-nosed cadaverous parson who guided us took us first to the ruin, which he said had never been finished, as the Reformation had stopped the building of it: in spite of which story it is visibly not later than 1340 in date, which fact I with qualms stoutly asserted to the parson’s disgust, though ‘tis quite a new fault to me to find local antiquaries post-date their antiquities: anyhow it was or had been a rich and beautiful “decorated” chapel without aisles, and for all I know had never been finished . . .” (IJ p 15) 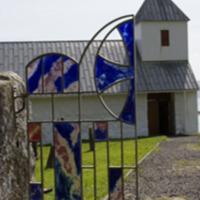 ‘ . . . thence we went into the more modern church (such a flower-bed as its roof was!) which was nevertheless interesting from its having a complete set of bench-ends richly carved (in deal) of the 15th century, but quite northern in character, the interlacing work mingling with regular 15th century heraldic work and very well carved figures that yet retained in costume and style a strong tinge of the 13th century: the ornament of the bishop’s throne, a chair with a trefoiled canopy, though I am pretty sure of the same date as thebench-ends, was entirely of the northern interlacing work’ (IJ pp 15-16). 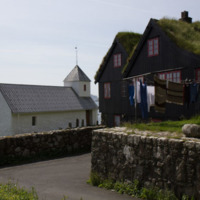 ‘From the church we went into the bonder’s house which was very clean, and all of unpainted deal, walls, floor, and ceiling, with queer painted old presses and chests about it: he turned up with his two children presently, and welcomed us in that queer northern manner I got used to after a little, as if he were thinking of anything else than us, nay rather, as if he were not quite sure if we were there or not: he was a handsome well-dressed man, very black of hair and skin, and with the melancholy very strong in his face and manner’ (IJ p 16). 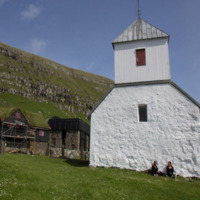 ‘There we drank unlimited milk, and then turned back up the slopes, but lay down a little way off the house, and ate and drank, thoroughly comfortable, and enjoying the rolling about in the fresh grass prodigiously’ (IJ p 16). 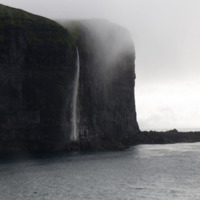 ‘ . . . the coasts were most wonderful on either side; pierced rocks running out from the cliffs under which a brig might have sailed: caves that the water ran up into, how far we could not tell, smooth walls of rock with streams running over them right into the sea . . .’ (IJ p 17) 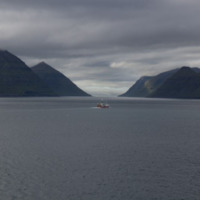 ‘ . . . these would sink down into green slopes with farms on them, or be cleft into deep valleys over which would show crater-like or pyramidal mountains . . .’ (IJ p 17) 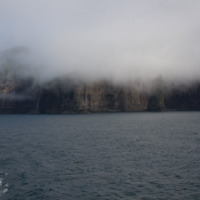 ‘ . . . and all this always without one inch of beach to be seen; and always when the cliffs sank you could see little white clouds lying about on the hillsides’ (IJ p 17) 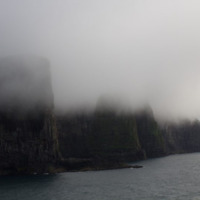 ‘ . . . I could see nothing at all of the gates we had come out by, no slopes of grass, or valleys opening out from the shore; nothing but a terrible wall of rent and furrowed rocks, the little clouds still entangled here and there about the tops of them: here the wall would be rent from top to bottom and its two sides would yawn as if they would have fallen asunder, here it was buttressed with great masses of stone that had slipped from its top; there it ran up into all manner of causeless-looking spikes: there was no beach below the wall, no foam breaking at its feet’ (IJ pp 17-18) 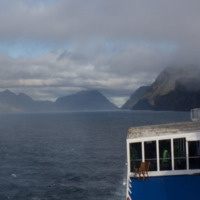