As I stood there Ellen detached herself from our happy friends who still stood on the little strand and came up to me. She took me by the hand, and said softly, “Take me on to the house at once; we need not wait for the others: I had rather not.” 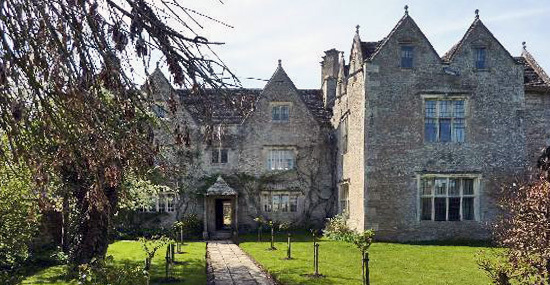 had a mind to say that I did not know the way thither, and that the river-side dwellers should lead; but almost without my will my feet moved on along the road they knew. The raised way led us into a little field bounded by a backwater of the river on one side; on the right hand we could see a cluster of small houses and barns, new and old, and before us a grey stone barn and a wall partly overgrown with ivy, over which a few grey gables showed. The village road ended in the shallow of the aforesaid backwater. We crossed the road, and again almost without my will my hand raised the latch of a door in the wall, and we stood presently on a stone path which led up to the old house to which fate in the shape of Dick had so strangely brought me in this new world of men. My companion gave a sigh of pleased surprise and enjoyment; nor did I wonder, for the garden between the wall and the house was redolent of the June flowers, and the roses were rolling over one another with that delicious superabundance of small well-tended gardens which at first sight takes away all thought from the beholder save that of beauty.

The blackbirds were singing their loudest, the doves were cooing on the roof-ridge, the rooks in the high elm-trees beyond were garrulous among the young leaves, and the swifts wheeled whining about the gables. And the house itself was a fit guardian for all the beauty of this heart of summer.

Once again Ellen echoed my thoughts as she said:

“Yes, friend, this is what I came out for to see; this many-gabled old house built by the simple country-folk of the long-past times, regardless of all the turmoil that was going on in cities and courts, is lovely still amidst all the beauty which these latter days have created; and I do not wonder at our friends tending it carefully and making much of it. It seems to me as if it had waited for these happy days, and held in it the gathered crumbs of happiness of the confused and turbulent past.”

She led me up close to the house, and laid her shapely sun-browned hand and arm on the lichened wall as if to embrace it, and cried out, “O me! O me! How I love the earth, and the seasons, and weather, and all things that deal with it, and all that grows out of it,—as this has done!”

I could not answer her, or say a word. Her exultation and pleasure were so keen and exquisite, and her beauty, so delicate, yet so interfused with energy, expressed it so fully, that any added word would have been commonplace and futile. I dreaded lest the others should come in suddenly and break the spell she had cast about me; but we stood there a while by the corner of the big gable of the house, and no one came. I heard the merry voices some way off presently, and knew that they were going along the river to the great meadow on the other side of the house and garden.

We drew back a little, and looked up at the house: the door and the windows were open to the fragrant sun-cured air; from the upper window-sills hung festoons of flowers in honour of the festival, as if the others shared in the love for the old house.

“Come in,” said Ellen. “I hope nothing will spoil it inside; but I don’t think it will. Come! we must go back presently to the others. They have gone on to the tents; for surely they must have tents pitched for the haymakers—the house would not hold a tithe of the folk, I am sure.”

She led me on to the door, murmuring little above her breath as she did so, “The earth and the growth of it and the life of it! If I could but say or show how I love it!” 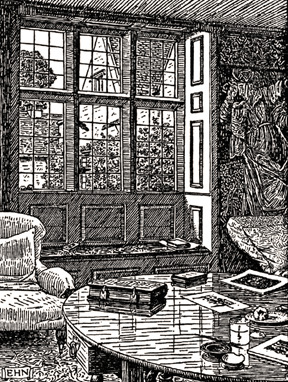 We went in, and found no soul in any room as we wandered from room to room,—from the rose-covered porch to the strange and quaint garrets amongst the great timbers of the roof, where of old time the tillers and herdsmen of the manor slept, but which a-nights seemed now, by the small size of the beds, and the litter of useless and disregarded matters—bunches of dying flowers, feathers of birds, shells of starling’s eggs, caddis worms in mugs, and the like—seemed to be inhabited for the time by children.

Everywhere there was but little furniture, and that only the most necessary, and of the simplest forms. The extravagant love of ornament which I had noted in this people elsewhere seemed here to have given place to the feeling that the house itself and its associations was the ornament of the country life amidst which it had been left stranded from old times, and that to re-ornament it would but take away its use as a piece of natural beauty 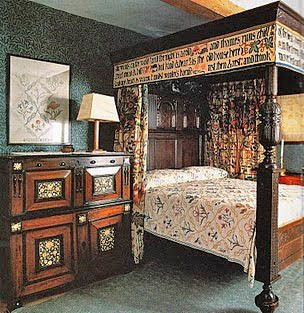 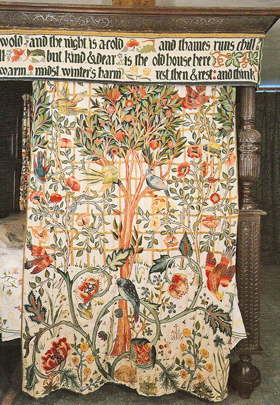 Curtain embroidered by May Morris

I asked a few random questions of Ellen as we sat there, but scarcely listened to her answers, and presently became silent, and then scarce conscious of anything, but that I was there in that old room, the doves crooning from the roofs of the barn and dovecot beyond the window opposite to me.

My thought returned to me after what I think was but a minute or two, but which, as in a vivid dream, seemed as if it had lasted a long time, when I saw Ellen sitting, looking all the fuller of life and pleasure and desire from the contrast with the grey faded tapestry with its futile design, which was now only bearable because it had grown so faint and feeble. 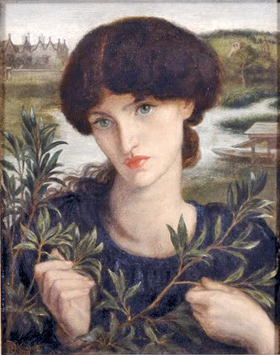 She looked at me kindly, but as if she read me through and through. She said: “You have begun again your never-ending contrast between the past and this present. Is it not so?”

“True,” said I. “I was thinking of what you, with your capacity and intelligence, joined to your love of pleasure, and your impatience of unreasonable restraint—of what you would have been in that past. And even now, when all is won and has been for a long time, my heart is sickened with thinking of all the waste of life that has gone on for so many years.”

She rose up and said: “Come, I must not let you go off into a dream again so soon. If we must lose you, I want you to see all that you can see first before you go back again.”

She smiled somewhat sadly, and said: “Not yet; we will not talk of that yet. Only, what were you thinking of just now?” 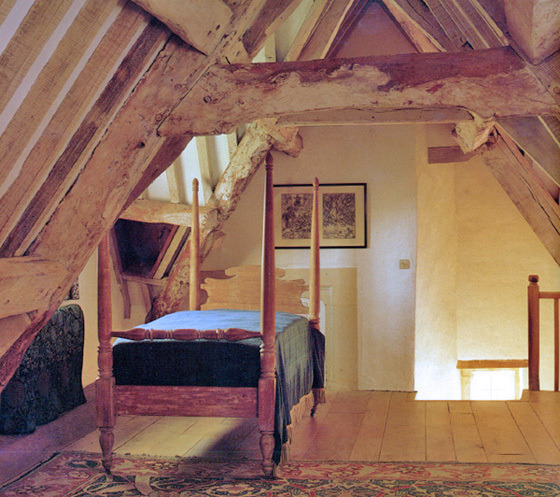 I said falteringly: “I was saying to myself, The past, the present? Should she not have said the contrast of the present with the future: of blind despair with hope?”

“I knew it,” she said. Then she caught my hand and said excitedly, “Come, while there is yet time! Come!” And she led me out of the room; and as we were going downstairs and out of the house into the garden by a little side door which opened out of a curious lobby, she said in a calm voice, as if she wished me to forget her sudden nervousness: “Come! we ought to join the others before they come here looking for us. And let me tell you, my friend, that I can see you are too apt to fall into mere dreamy musing: no doubt because you are not yet used to our life of repose amidst of energy; of work which is pleasure and pleasure which is work.”

She paused a little, and as we came out into the lovely garden again, she said: “My friend, you were saying that you wondered what I should have been if I had lived in those past days of turmoil and oppression. Well, I think I have studied the history of them to know pretty well. I should have been one of the poor, for my father when he was working was a mere tiller of the soil. Well, I could not have borne that; therefore my beauty and cleverness and brightness” (she spoke with no blush or simper of false shame) “would have been sold to rich men, and my life would have been wasted indeed; for I know enough of that to know that I should have had no choice, no power of will over my life; and that I should never have bought pleasure from the rich men, or even opportunity of action, whereby I might have won some true excitement. I should have wrecked and wasted in one way or another, either by penury or by luxury. Is it not so?”

View of Kelmscott Manor from the gardens.

She was going to say something else, when a little gate in the fence, which led into a small elm-shaded field, was opened, and Dick came with hasty cheerfulness up the garden path, and was presently standing between us, a hand laid on the shoulder of each. He said: “Well, neighbours, I thought you two would like to see the old house quietly without a crowd in it. Isn’t it a jewel of a house after its kind? Well, come along, for it is getting towards dinner-time. Perhaps you, guest, would like a swim before we sit down to what I fancy will be a pretty long feast?”

“Well, good-bye for the present, neighbour Ellen,” said Dick. “Here comes Clara to take care of you, as I fancy she is more at home amongst our friends here.”

Clara came out of the fields as he spoke; and with one look at Ellen I turned and went with Dick, doubting, if I must say the truth, whether I should see her again.