'tradition says too that it was once so well -wooded, that standing in the middle you couldn't see the hill-sides for the trees:'
There's a more modern saying, not yet a tradition:  "if you get lost in an Icelandic forest, stand up."  This rather lame joke reflects the dearth of trees in Iceland today, and also in 1871.  The descriptions of ample trees in the sagas had a modicum of truth for tenth century low-lands, perhaps, but Iceland never had the wood-lands of Britain or Denmark. Morris seems skeptical, and we should recall his reactions to the terrain near Njals house (see his entry for July 10th).
'that hereby fairs like our 'mops' used to be held, and that the lads and lasses used to dance in this dell at these fairs Midsummer-night I think being the time.'
'Morris's diction here, the 'lads and lasses' dancing in a 'dell' at a Midsummer fair suggests medieval England rather than saga-age Iceland.  There were no such "mops" at yearly Althings where more weighty matters, usually legal arguments, were taken up.
I bought two old silver spoons at starting from the kind old goody,'
'The same goodwife from whom he'd bought the 'warm stockings' a day earlier.  These spoons, and other valuables brought back to Kelmscott, are mentioned in passing, and thus equal to the warm stockings.  Another traveller would have bragged about his bargain, citing kroners or pounds.  That's not Morris's style.
'The hero and 'landnams-man' of the vale is  Ingimund the Old. And most of the steads Thorsteinn shows us have reference to him;'
See my notes above (July 13th and 17th, on those first settlers, whose lives and exploits live on, not just in the sagas, but in the farm-steads that still bear their names.   Morris talks here about such farms, about the ‘traditional  place of the deadly wounding of Ingimund . . .we turn round a corner and come upon Ingimund’s own stead . . . . 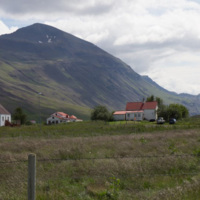 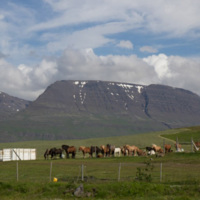 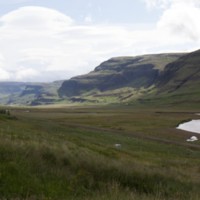 ‘I stood looking at the hills and wondering at how much bigger they look here than I thought at first they were: our horses, now feeding on a green slope, some third of the way up, seem little bits of specks: a long way above them the sheep feed on the slopes of the steps that make the mountain, and its crest is all hidden in white clouds, those very clouds we came through the other day from Buoara: below the clouds is a goodish sprinkiling of snow all along the eastern hill-sides of the valley. The air was quite full of sea-swallows sweeping about: I stood and watched them some while, and thought the whole place beautiful in spite of the ungenial day: then too we were come close to the northern sea, and to our turning point: all away from this was south and home again’ (IJ p 92).