Location: At the priest's house at Oddi

Tradition has it that Ingolfr Arnarson in 874 sailed from western Norway to Iceland. There he threw his bed-posts overboard, vowing to settle wherever the currents washed them ashore, and that turned out to be, fortuitously, near the present site of Reykjavik. So when the Icelanders wrote their own constitution in 1874, attaining Home Rule and partial Independence from Denmark, they could claim a 1000-year anniversary for the country and its capital.

'wastes of Thurso and Olfus waters'
Many of Iceland's rivers do indeed seem like 'wastes.' They are full of gravel and sand, yellowish-white in hue and perfectly opaque, all because they flow from the many (now fewer, alas) high-land glaciers in the interior. But the Rang-river, which the party fords here, is not fed by glacial melt and it is hence, to Morris's delight, 'as clear as glass' and 'quite beautiful.'

'Soemund, Ari, and Snorri' Sturluson'
Morris's assertion here that these three men who lived and worked at Oddi were the 'great guardians of the body of Icelandic lore' is quite true. Soemund, or Saemundr frodi (1056-1133) compiled the mythic and heroic poems now known as the Elder or Poetic Edda. Snorri Sturluson (1179-1214) wrote the Younger or Prose Edda (The meaning and source of 'edda' is uncertain; it might be derived from 'Oddi,' where Morris has on this night enjoyed the old priest's hospitality and is now musing on his predecessors there). Ari Thorgilsson, more often called Ari inn frodi, (Ari the wise) wrote Islendingabok (the Book of the Icelanders), an important and very early, ca. 1125, chronicle of events and dates and names re Iceland's settlement. Snorri Sturluson wrote not just his Edda, but also Heimskringla (World's Ring), a history of Norwegian kings from mythic times up to 1177. Morris and Magnusson translated Heimskringla; it makes up the bulk of the six-volume Saga Library. Snorri was also an active participant in the often bloody events of the 13th century, and he was slain in his bath at Reykholt, where the Morris party will stay in late August. 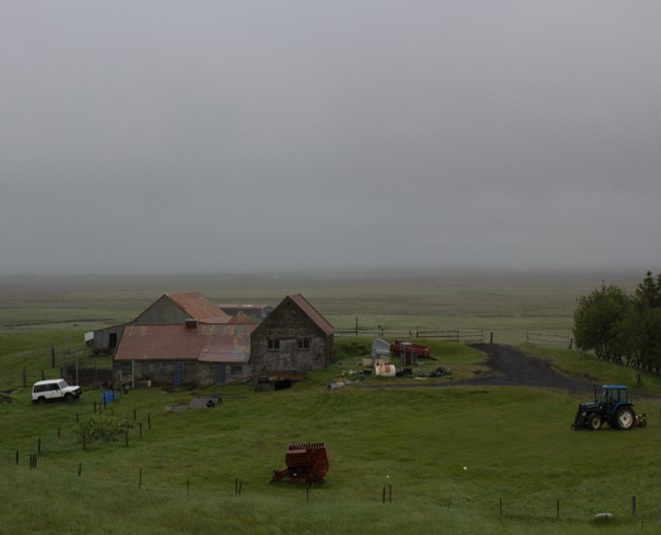 ‘Magnússon tells us we are close to Oddi, so we go ahead of the train, and gallop over the last bit of way up to where there lies a low green knoll on the face of the grey upland which is at the back of the houses at Oddi, then turning a corner, we ride in through the lane between the garth walls and into a little yard in front of a six-gabled house of the regular Icelandic type, turf walls ever so thick, and wooden gables facing the sunny side: these are Stockholm-tarred and have little white framed windows with small panes of glass in them: both walls and roof are just as green as the field they spring from, all doors are very low . . .’ (IJ p 40) 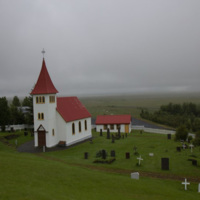 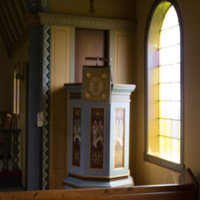 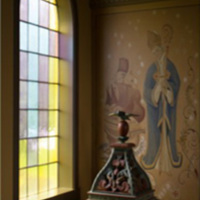 ‘. . . inside and outside the church and farmstead Morris stayed at. The actual farmstead is on the site of the one Morris stayed in, not the original of course’ (Martin Stott).