CONCERNING THE ARRANGEMENT OF LIFE

“Well,” I said, “about those ‘arrangements’ which you spoke of as taking the place of government, could you give me any account of them?”

“Neighbour,” he said, “although we have simplified our lives a great deal from what they were, and have got rid of many conventionalities and many sham wants, which used to give our forefathers much trouble, yet our life is too complex for me to tell you in detail by means of words how it is arranged; you must find that out by living amongst us. It is true that I can better tell you what we don’t do, than what we do do.”

“This is the way to put it,” said he: “We have been living for a hundred and fifty years, at least, more or less in our present manner, and a tradition or habit of life has been growing on us; and that habit has become a habit of acting on the whole for the best. It is easy for us to live without robbing each other. It would be possible for us to contend with and rob each other, but it would be harder for us than refraining from strife and robbery. That is in short the foundation of our life and our happiness.”

“Whereas in the old days,” said I, “it was very hard to live without strife and robbery. That’s what you mean, isn’t it, by giving me the negative side of your good conditions?”

“Yes,” he said, “it was so hard, that those who habitually acted fairly to their neighbours were celebrated as saints and heroes, and were looked up to with the greatest reverence.”

“While they were alive?” said I.

“But as to these days,” I said; “you don’t mean to tell me that no one ever transgresses this habit of good fellowship?”

“Certainly not,” said Hammond, “but when the transgressions occur, everybody, transgressors and all, know them for what they are; the errors of friends, not the habitual actions of persons driven into enmity against society.”

“How could we have them,” said he, “since there is no rich class to breed enemies against the state by means of the injustice of the state?”

Said I: “I thought that I understood from something that fell from you a little while ago that you had abolished civil law. Is that so, literally?”

“It abolished itself, my friend,” said he. “As I said before, the civil law-courts were upheld for the defence of private property; for nobody ever pretended that it was possible to make people act fairly to each other by means of brute force.

Well, private property being abolished, all the laws and all the legal ‘crimes’ which it had manufactured of course came to an end. Thou shalt not steal, had to be translated into, Thou shalt work in order to live happily. Is there any need to enforce that commandment by violence?” 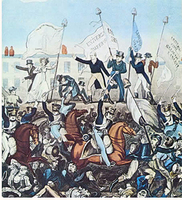 “Well,” said I, “that is understood, and I agree with it; but how about crimes of violence? would not their occurrence (and you admit that they occur) make criminal law necessary?”

Said he: “In your sense of the word, we have no criminal law either. Let us look at the matter closer, and see whence crimes of violence spring. By far the greater part of these in past days were the result of the laws of private property, which forbade the satisfaction of their natural desires to all but a privileged few, and of the general visible coercion which came of those laws. All that cause of violent crime is gone. Again, many violent acts came from the artificial perversion of the sexual passions, which caused overweening jealousy and the like miseries. Now, when you look carefully into these, you will find that what lay at the bottom of them was mostly the idea (a law-made idea) of the woman being the property of the man, whether he were husband, father, brother, or what not. That idea has of course vanished with private property, as well as certain follies about the ‘ruin’ of women for following their natural desires in an illegal way, which of course was a convention caused by the laws of private property.

“Another cognate cause of crimes of violence was the family tyranny, which was the subject of so many novels and stories of the past, and which once more was the result of private property. Of course that is all ended, since families are held together by no bond of coercion, legal or social, but by mutual liking and affection, and everybody is free to come or go as he or she pleases. Furthermore, our standards of honour and public estimation are very different from the old ones; success in besting our neighbours is a road to renown now closed, let us hope for ever. Each man is free to exercise his special faculty to the utmost, and every one encourages him in so doing. So that we have got rid of the scowling envy, coupled by the poets with hatred, and surely with good reason; heaps of unhappiness and ill-blood were caused by it, which with irritable and passionate men—i.e., energetic and active men—often led to violence.”

I laughed, and said: “So that you now withdraw your admission, and say that there is no violence amongst you?”

“No,” said he, “I withdraw nothing; as I told you, such things will happen. Hot blood will err sometimes. A man may strike another, and the stricken strike back again, and the result be a homicide, to put it at the worst. But what then? Shall we the neighbours make it worse still? Shall we think so poorly of each other as to suppose that the slain man calls on us to revenge him, when we know that if he had been maimed, he would, when in cold blood and able to weigh all the circumstances, have forgiven his manner? Or will the death of the slayer bring the slain man to life again and cure the unhappiness his loss has caused?”

“Yes,” I said, “but consider, must not the safety of society be safeguarded by some punishment?”

“There, neighbour!” said the old man, with some exultation “You have hit the mark. That PUNISHMENT of which men used to talk so wisely and act so foolishly, what was it but the expression of their fear? And they had need to fear, since they—i.e., the rulers of society—were dwelling like an armed band in a hostile country. But we who live amongst our friends need neither fear nor punish. Surely if we, in dread of an occasional rare homicide, an occasional rough blow, were solemnly and legally to commit homicide and violence, we could only be a society of ferocious cowards. Don’t you think so, neighbour?”

“Yet you must understand,” said the old man, “that when any violence is committed, we expect the transgressor to make any atonement possible to him, and he himself expects it. But again, think if the destruction or serious injury of a man momentarily overcome by wrath or folly can be any atonement to the commonwealth? Surely it can only be an additional injury to it.”

Said I: “But suppose the man has a habit of violence,—kills a man a year, for instance?”

“Such a thing is unknown,” said he. “In a society where there is no punishment to evade, no law to triumph over, remorse will certainly follow transgression.”

“And lesser outbreaks of violence,” said I, “how do you deal with them? for hitherto we have been talking of great tragedies, I suppose?”

Said Hammond: “If the ill-doer is not sick or mad (in which case he must be restrained till his sickness or madness is cured) it is clear that grief and humiliation must follow the ill-deed; and society in general will make that pretty clear to the ill-doer if he should chance to be dull to it; and again, some kind of atonement will follow,—at the least, an open acknowledgement of the grief and humiliation. Is it so hard to say, I ask your pardon, neighbour?—Well, sometimes it is hard—and let it be.”

“You think that enough?” said I.

“Yes,” said he, “and moreover it is all that we CAN do. If in addition we torture the man, we turn his grief into anger, and the humiliation he would otherwise feel for HIS wrong-doing is swallowed up by a hope of revenge for OUR wrong-doing to him. He has paid the legal penalty, and can ‘go and sin again’ with comfort. Shall we commit such a folly, then? Remember Jesus had got the legal penalty remitted before he said ‘Go and sin no more.’ Let alone that in a society of equals you will not find any one to play the part of torturer or jailer, though many to act as nurse or doctor.”

“So,” said I, “you consider crime a mere spasmodic disease, which requires no body of criminal law to deal with it?”

“Pretty much so,” said he; “and since, as I have told you, we are a healthy people generally, so we are not likely to be much troubled with THIS disease.”

“Well, you have no civil law, and no criminal law. But have you no laws of the market, so to say—no regulation for the exchange of wares? for you must exchange, even if you have no property.”

Said he: “We have no obvious individual exchange, as you saw this morning when you went a-shopping; but of course there are regulations of the markets, varying according to the circumstances and guided by general custom. But as these are matters of general assent, which nobody dreams of objecting to, so also we have made no provision for enforcing them: therefore I don’t call them laws. In law, whether it be criminal or civil, execution always follows judgment, and someone must suffer. When you see the judge on his bench, you see through him, as clearly as if he were made of glass, the policeman to emprison, and the soldier to slay some actual living person. Such follies would make an agreeable market, wouldn’t they?”

“Certainly,” said I, “that means turning the market into a mere battle-field, in which many people must suffer as much as in the battle-field of bullet and bayonet. And from what I have seen I should suppose that your marketing, great and little, is carried on in a way that makes it a pleasant occupation.”

“You are right, neighbour,” said he. “Although there are so many, indeed by far the greater number amongst us, who would be unhappy if they were not engaged in actually making things, and things which turn out beautiful under their hands,—there are many, like the housekeepers I was speaking of, whose delight is in administration and organisation, to use long-tailed words; I mean people who like keeping things together, avoiding waste, seeing that nothing sticks fast uselessly. Such people are thoroughly happy in their business, all the more as they are dealing with actual facts, and not merely passing counters round to see what share they shall have in the privileged taxation of useful people, which was the business of the commercial folk in past days. Well, what are you going to ask me next?”