A MARKET BY THE WAY

We turned away from the river at once, and were soon in the main road that runs through Hammersmith. But I should have had no guess as to where I was, if I had not started from the waterside; for King Street was gone, and the highway ran through wide sunny meadows and garden-like tillage. The Creek, which we crossed at once, had been rescued from its culvert, and as we went over its pretty bridge we saw its waters, yet swollen by the tide, covered with gay boats of different sizes. There were houses about, some on the road, some amongst the fields with pleasant lanes leading down to them, and each surrounded by a teeming garden. They were all pretty in design, and as solid as might be, but countryfied in appearance, like yeomen’s dwellings; some of them of red brick like those by the river, but more of timber and plaster, which were by the necessity of their construction so like mediaeval houses of the same materials that I fairly felt as if I were alive in the fourteenth century; a sensation helped out by the costume of the people that we met or passed, in whose dress there was nothing “modern.” Almost everybody was gaily dressed, but especially the women, who were so well-looking, or even so handsome, that I could scarcely refrain my tongue from calling my companion’s attention to the fact. Some faces I saw that were thoughtful, and in these I noticed great nobility of expression, but none that had a glimmer of unhappiness, and the greater part (we came upon a good many people) were frankly and openly joyous. 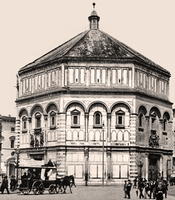 I thought I knew the Broadway by the lie of the roads that still met there. On the north side of the road was a range of buildings and courts, low, but very handsomely built and ornamented, and in that way forming a great contrast to the unpretentiousness of the houses round about; while above this lower building rose the steep lead-covered roof and the buttresses and higher part of the wall of a great hall, of a splendid and exuberant style of architecture, of which one can say little more than that it seemed to me to embrace the best qualities of the Gothic of northern Europe with those of the Saracenic and Byzantine, though there was no copying of any one of these styles. On the other, the south side, of the road was an octagonal building with a high roof, not unlike the Baptistry at Florence in outline, except that it was surrounded by a lean-to that clearly made an arcade or cloisters to it: it also was most delicately ornamented.

This whole mass of architecture which we had come upon so suddenly from amidst the pleasant fields was not only exquisitely beautiful in itself, but it bore upon it the expression of such generosity and abundance of life that I was exhilarated to a pitch that I had never yet reached. I fairly chuckled for pleasure. My friend seemed to understand it, and sat looking on me with a pleased and affectionate interest. We had pulled up amongst a crowd of carts, wherein sat handsome healthy-looking people, men, women, and children very gaily dressed, and which were clearly market carts, as they were full of very tempting-looking country produce.

I said, “I need not ask if this is a market, for I see clearly that it is; but what market is it that it is so splendid? And what is the glorious hall there, and what is the building on the south side?”

“O,” said he, “it is just our Hammersmith market; and I am glad you like it so much, for we are really proud of it. Of course the hall inside is our winter Mote-House; for in summer we mostly meet in the fields down by the river opposite Barn Elms. The building on our right hand is our theatre: I hope you like it.”

He blushed a little as he said: “I am glad of that, too, because I had a hand in it; I made the great doors, which are of damascened bronze. We will look at them later in the day, perhaps: but we ought to be getting on now. As to the market, this is not one of our busy days; so we shall do better with it another time, because you will see more people.”

I thanked him, and said: “Are these the regular country people? What very pretty girls there are amongst them.” 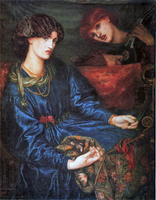 As I spoke, my eye caught the face of a beautiful woman, tall, dark-haired, and white-skinned, dressed in a pretty light-green dress in honour of the season and the hot day, who smiled kindly on me, and more kindly still, I thought on Dick; so I stopped a minute, but presently went on:

“I ask because I do not see any of the country-looking people I should have expected to see at a market—I mean selling things there.”

“I don’t understand,” said he, “what kind of people you would expect to see; nor quite what you mean by ‘country’ people. These are the neighbours, and that like they run in the Thames valley. There are parts of these islands which are rougher and rainier than we are here, and there people are rougher in their dress; and they themselves are tougher and more hard-bitten than we are to look at. But some people like their looks better than ours; they say they have more character in them—that’s the word. Well, it’s a matter of taste.—Anyhow, the cross between us and them generally turns out well,” added he, thoughtfully.

I heard him, though my eyes were turned away from him, for that pretty girl was just disappearing through the gate with her big basket of early peas, and I felt that disappointed kind of feeling which overtakes one when one has seen an interesting or lovely face in the streets which one is never likely to see again; and I was silent a little. At last I said: “What I mean is, that I haven’t seen any poor people about—not one.”

He knit his brows, looked puzzled, and said: “No, naturally; if anybody is poorly, he is likely to be within doors, or at best crawling about the garden: but I don’t know of any one sick at present. Why should you expect to see poorly people on the road?”

“No,” said he, smiling merrily, “I really do not know. The fact is, you must come along quick to my great-grandfather, who will understand you better than I do. Come on, Greylocks!” Therewith he shook the reins, and we jogged along merrily eastward.