Amidst such talk, driving quietly through the balmy evening, we came to Hammersmith, and were well received by our friends there. Boffin, in a fresh suit of clothes, welcomed me back with stately courtesy; the weaver wanted to button-hole me and get out of me what old Hammond had said, but was very friendly and cheerful when Dick warned him off; Annie shook hands with me, and hoped I had had a pleasant day—so kindly, that I felt a slight pang as our hands parted; for to say the truth, I liked her better than Clara, who seemed to be always a little on the defensive, whereas Annie was as frank as could be, and seemed to get honest pleasure from everything and everybody about her without the least effort.

We had quite a little feast that evening, partly in my honour, and partly, I suspect, though nothing was said about it, in honour of Dick and Clara coming together again. The wine was of the best; the hall was redolent of rich summer flowers; and after supper we not only had music (Annie, to my mind, surpassing all the others for sweetness and clearness of voice, as well as for feeling and meaning), but at last we even got to telling stories, and sat there listening, with no other light but that of the summer moon streaming through the beautiful traceries of the windows, as if we had belonged to time long passed, when books were scarce and the art of reading somewhat rare.

Indeed, I may say here, that, though, as you will have noted, my friends had mostly something to say about books, yet they were not great readers, considering the refinement of their manners and the great amount of leisure which they obviously had. In fact, when Dick, especially, mentioned a book, he did so with an air of a man who has accomplished an achievement; as much as to say, “There, you see, I have actually read that!” 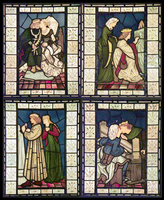 The evening passed all too quickly for me; since that day, for the first time in my life, I was having my fill of the pleasure of the eyes without any of that sense of incongruity, that dread of approaching ruin, which had always beset me hitherto when I had been amongst the beautiful works of art of the past, mingled with the lovely nature of the present; both of them, in fact, the result of the long centuries of tradition, which had compelled men to produce the art, and compelled nature to run into the mould of the ages. Here I could enjoy everything without an afterthought of the injustice and miserable toil which made my leisure; the ignorance and dulness of life which went to make my keen appreciation of history; the tyranny and the struggle full of fear and mishap which went to make my romance. The only weight I had upon my heart was a vague fear as it drew toward bed-time concerning the place wherein I should wake on the morrow: but I choked that down, and went to bed happy, and in a very few moments was in a dreamless sleep.