GOING UP THE RIVER

When I did wake, to a beautiful sunny morning, I leapt out of bed with my over-night apprehension still clinging to me, which vanished delightfully however in a moment as I looked around my little sleeping chamber and saw the pale but pure-coloured figures painted on the plaster of the wall, with verses written underneath them which I knew somewhat over well.

I dressed speedily, in a suit of blue laid ready for me, so handsome that I quite blushed when I had got into it, feeling as I did so that excited pleasure of anticipation of a holiday, which, well remembered as it was, I had not felt since I was a boy, new come home for the summer holidays.

It seemed quite early in the morning, and I expected to have the hall to myself when I came into it out of the corridor wherein was my sleeping chamber; but I met Annie at once, who let fall her broom and gave me a kiss, quite meaningless I fear, except as betokening friendship, though she reddened as she did it, not from shyness, but from friendly pleasure, and then stood and picked up her broom again, and went on with her sweeping, nodding to me as if to bid me stand out of the way and look on; which, to say the truth, I thought amusing enough, as there were five other girls helping her, and their graceful figures engaged in the leisurely work were worth going a long way to see, and their merry talk and laughing as they swept in quite a scientific manner was worth going a long way to hear. But Annie presently threw me back a word or two as she went on to the other end of the hall: “Guest,” she said, “I am glad that you are up early, though we wouldn’t disturb you; for our Thames is a lovely river at half-past six on a June morning: and as it would be a pity for you to lose it, I am told just to give you a cup of milk and a bit of bread outside there, and put you into the boat: for Dick and Clara are all ready now. Wait half a minute till I have swept down this row.”

So presently she let her broom drop again, and came and took me by the hand and led me out on to the terrace above the river, to a little table under the boughs, where my bread and milk took the form of as dainty a breakfast as any one could desire, and then sat by me as I ate. And in a minute or two Dick and Clara came to me, the latter looking most fresh and beautiful in a light silk embroidered gown, which to my unused eyes was extravagantly gay and bright; while Dick was also handsomely dressed in white flannel prettily embroidered. Clara raised her gown in her hands as she gave me the morning greeting, and said laughingly: “Look, guest! you see we are at least as fine as any of the people you felt inclined to scold last night; you see we are not going to make the bright day and the flowers feel ashamed of themselves. Now scold me!”

Quoth I: “No, indeed; the pair of you seem as if you were born out of the summer day itself; and I will scold you when I scold it.”

“Well, you know,” said Dick, “this is a special day—all these days are, I mean. The hay-harvest is in some ways better than corn-harvest because of the beautiful weather; and really, unless you had worked in the hay-field in fine weather, you couldn’t tell what pleasant work it is. The women look so pretty at it, too,” he said, shyly; “so all things considered, I think we are right to adorn it in a simple manner.”

“Do the women work at it in silk dresses?” said I, smiling. 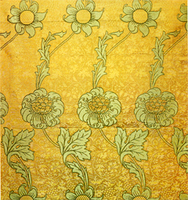 Dick was going to answer me soberly; but Clara put her hand over his mouth, and said, “No, no, Dick; not too much information for him, or I shall think that you are your old kinsman again. Let him find out for himself: he will not have long to wait.”

“Yes,” quoth Annie, “don’t make your description of the picture too fine, or else he will be disappointed when the curtain is drawn. I don’t want him to be disappointed. But now it’s time for you to be gone, if you are to have the best of the tide, and also of the sunny morning. Good-bye, guest.”

She kissed me in her frank friendly way, and almost took away from me my desire for the expedition thereby; but I had to get over that, as it was clear that so delightful a woman would hardly be without a due lover of her own age. We went down the steps of the landing stage, and got into a pretty boat, not too light to hold us and our belongings comfortably, and handsomely ornamented; and just as we got in, down came Boffin and the weaver to see us off. The former had now veiled his splendour in a due suit of working clothes, crowned with a fantail hat, which he took off, however, to wave us farewell with his grave old-Spanish-like courtesy. Then Dick pushed off into the stream, and bent vigorously to his sculls, and Hammersmith, with its noble trees and beautiful water-side houses, began to slip away from us.

As we went, I could not help putting beside his promised picture of the hay-field as it was then the picture of it as I remembered it, and especially the images of the women engaged in the work rose up before me: the row of gaunt figures, lean, flat-breasted, ugly, without a grace of form or face about them; dressed in wretched skimpy print gowns, and hideous flapping sun-bonnets, moving their rakes in a listless mechanical way.

How often had that marred the loveliness of the June day to me; how often had I longed to see the hay-fields peopled with men and women worthy of the sweet abundance of midsummer, of its endless wealth of beautiful sights, and delicious sounds and scents. And now, the world had grown old and wiser, and I was to see my hope realised at last!