Before we parted from these girls we saw two sturdy young men and a woman putting off from the Berkshire shore, and then Dick bethought him of a little banter of the girls, and asked them how it was that there was nobody of the male kind to go with them across the water, and where their boats were gone to. Said one, the youngest of the party: “O, they have got the big punt to lead stone from up the water.” 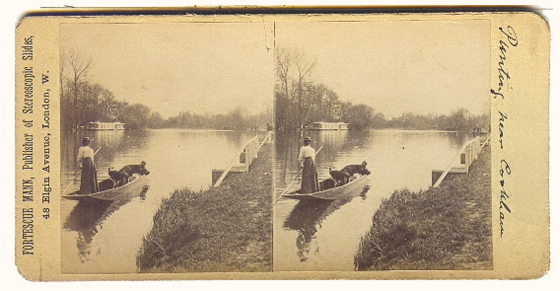 Said an older girl, laughing: “You had better go and see them. Look there,” and she pointed northwest, “don’t you see building going on there?”

“Yes,” said Dick, “and I am rather surprised at this time of the year; why are they not haymaking with you?”

The girls all laughed at this, and before their laugh was over, the Berkshire boat had run on to the grass and the girls stepped in lightly, still sniggering, while the new comers gave us the sele of the day. But before they were under way again, the tall girl said:

“Excuse us for laughing, dear neighbours, but we have had some friendly bickering with the builders up yonder, and as we have no time to tell you the story, you had better go and ask them: they will be glad to see you—if you don’t hinder their work.”

They all laughed again at that, and waved us a pretty farewell as the punters set them over toward the other shore, and left us standing on the bank beside our boat.

“Let us go and see them,” said Clara; “that is, if you are not in a hurry to get to Streatley, Walter?”

“O no,” said Walter, “I shall be glad of the excuse to have a little more of your company.”

So we left the boat moored there, and went on up the slow slope of the hill; but I said to Dick on the way, being somewhat mystified: “What was all that laughing about? what was the joke!”

“I can guess pretty well,” said Dick; “some of them up there have got a piece of work which interests them, and they won’t go to the haymaking, which doesn’t matter at all, because there are plenty of people to do such easy-hard work as that; only, since haymaking is a regular festival, the neighbours find it amusing to jeer good-humouredly at them.”

“I see,” said I, “much as if in Dickens’s time some young people were so wrapped up in their work that they wouldn’t keep Christmas.”

“Just so,” said Dick, “only these people need not be young either.”

“But what did you mean by easy-hard work?” said I.

Quoth Dick: “Did I say that? I mean work that tries the muscles and hardens them and sends you pleasantly weary to bed, but which isn’t trying in other ways: doesn’t harass you in short. Such work is always pleasant if you don’t overdo it. Only, mind you, good mowing requires some little skill. I’m a pretty good mower.”

This talk brought us up to the house that was a-building, not a large one, which stood at the end of a beautiful orchard surrounded by an old stone wall. “O yes, I see,” said Dick; “I remember, a beautiful place for a house: but a starveling of a nineteenth century house stood there: I am glad they are rebuilding: it’s all stone, too, though it need not have been in this part of the country: my word, though, they are making a neat job of it: but I wouldn’t have made it all ashlar.”

Walter and Clara were already talking to a tall man clad in his mason’s blouse, who looked about forty, but was I daresay older, who had his mallet and chisel in hand; there were at work in the shed and on the scaffold about half a dozen men and two women, blouse-clad like the carles, while a very pretty woman who was not in the work but was dressed in an elegant suit of blue linen came sauntering up to us with her knitting in her hand. She welcomed us and said, smiling: “So you are come up from the water to see the Obstinate Refusers: where are you going haymaking, neighbours?”

“O, right up above Oxford,” said Dick; “it is rather a late country. But what share have you got with the Refusers, pretty neighbour?”

Said she, with a laugh: “O, I am the lucky one who doesn’t want to work; though sometimes I get it, for I serve as model to Mistress Philippa there when she wants one: she is our head carver; come and see her.”

She led us up to the door of the unfinished house, where a rather little woman was working with mallet and chisel on the wall near by. She seemed very intent on what she was doing, and did not turn round when we came up; but a taller woman, quite a girl she seemed, who was at work near by, had already knocked off, and was standing looking from Clara to Dick with delighted eyes. None of the others paid much heed to us.

The blue-clad girl laid her hand on the carver’s shoulder and said: “Now Philippa, if you gobble up your work like that, you will soon have none to do; and what will become of you then?” 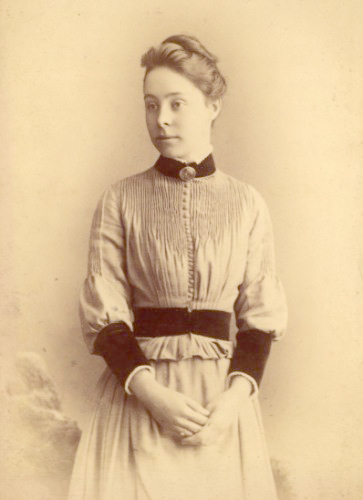 Phillipa Fawcett - daughter of suffragette Millicent Fawcett, who placed first in Cambridge mathematics examinations in 1980 - a possible inspiration for Phillipa

The carver turned round hurriedly and showed us the face of a woman of forty (or so she seemed), and said rather pettishly, but in a sweet voice:

“Don’t talk nonsense, Kate, and don’t interrupt me if you can help it.” She stopped short when she saw us, then went on with the kind smile of welcome which never failed us. “Thank you for coming to see us, neighbours; but I am sure that you won’t think me unkind if I go on with my work, especially when I tell you that I was ill and unable to do anything all through April and May; and this open-air and the sun and the work together, and my feeling well again too, make a mere delight of every hour to me; and excuse me, I must go on.”

She fell to work accordingly on a carving in low relief of flowers and figures, but talked on amidst her mallet strokes: “You see, we all think this the prettiest place for a house up and down these reaches; and the site has been so long encumbered with an unworthy one, that we masons were determined to pay off fate and destiny for once, and build the prettiest house we could compass here—and so— and so—”

Here she lapsed into mere carving, but the tall foreman came up and said: “Yes, neighbours, that is it: so it is going to be all ashlar because we want to carve a kind of a wreath of flowers and figures all round it; and we have been much hindered by one thing or other— Philippa’s illness amongst others,—and though we could have managed our wreath without her—”

“Could you, though?” grumbled the last-named from the face of the wall.

“Well, at any rate, she is our best carver, and it would not have been kind to begin the carving without her. So you see,” said he, looking at Dick and me, “we really couldn’t go haymaking, could we, neighbours? But you see, we are getting on so fast now with this splendid weather, that I think we may well spare a week or ten days at wheat-harvest; and won’t we go at that work then! Come down then to the acres that lie north and by west here at our backs and you shall see good harvesters, neighbours.

“Hurrah, for a good brag!” called a voice from the scaffold above us; “our foreman thinks that an easier job than putting one stone on another!”

There was a general laugh at this sally, in which the tall foreman joined; and with that we saw a lad bringing out a little table into the shadow of the stone-shed, which he set down there, and then going back, came out again with the inevitable big wickered flask and tall glasses, whereon the foreman led us up to due seats on blocks of stone, and said:

“Well, neighbours, drink to my brag coming true, or I shall think you don’t believe me! Up there!” said he, hailing the scaffold, “are you coming down for a glass?” Three of the workmen came running down the ladder as men with good “building legs” will do; but the others didn’t answer, except the joker (if he must so be called), who called out without turning round: “Excuse me, neighbours for not getting down. I must get on: my work is not superintending, like the gaffer’s yonder; but, you fellows, send us up a glass to drink the haymakers’ health.” Of course, Philippa would not turn away from her beloved work; but the other woman carver came; she turned out to be Philippa’s daughter, but was a tall strong girl, black-haired and gipsey-like of face and curiously solemn of manner. The rest gathered round us and clinked glasses, and the men on the scaffold turned about and drank to our healths; but the busy little woman by the door would have none of it all, but only shrugged her shoulders when her daughter came up to her and touched her.

So we shook hands and turned our backs on the Obstinate Refusers, went down the slope to our boat, and before we had gone many steps heard the full tune of tinkling trowels mingle with the humming of the bees and the singing of the larks above the little plain of Basildon.